Although every React app is unique, they all start from the same place:

This foundation is essential!

… But it’s also monotonous to set up for every project.

I’m sure you’d rather spend time on the features unique to your app and Vite can help!

With one command and a few seconds, it can generate all the above boilerplate for you and more!

Needless to say this is something you need in your arsenal of developer tutorials!

In this tutorial, I will show you step by step:

To wrap up this ✨ ultimate ✨ post, I’ll give a whistle-stop tour of some advanced Vite features.

What is the difference between Vite and Create React App?

If you've been around the React ecosystem for a minute, you will likely recognize Create React App (CRA), which, on the surface, sounds very similar to Vite.

Since CRA is made and maintained by React themselves, it's natural to wonder how these two tools compare.

In particular, React acknowledged that to use JSX, you need some toolchain, and that made React's learning curve much steeper compared to, for example, Vue, where you don't need a build tool.

More experienced React developers use and appreciate CRA as well. Although, they sometimes need to use something else once their projects become more complex.

The web has fundamentally evolved in the 7 years since CRA was designed.

According to the Vite documentation, "as we build more and more ambitious applications, the amount of JavaScript we are dealing with is also increasing dramatically. It is not uncommon for large-scale projects to contain thousands of modules."

Because the dependencies to make a React app have become so large and interconnected, tools like CRA can sometimes take an unreasonably long wait (sometimes up to minutes!) to start up, and changes can take a couple of seconds to be reflected in the browser.

We can only benefit from these advancements if our tools are updated.

That is where Vite comes in.

Vite aims to leverage advancements in the ecosystem. Not only to make load times quicker but also to offer an instantaneous, almost magic-feeling developer experience as you saw in the HMR video above.

Unlike Create React App, Vite is not inherently coupled with React. You could use Vite with Vue, for example!

While you might not plan to use another frontend library any time soon, open source maintainers banding together across the ecosystem will benefit you as more features make their way to releases and bugs are squashed more quickly.

Getting Started With Vite

Alright, now you know all about Vite (and how it compares to CRA), let's get hands-on.

In this section, I encourage you to follow along as we install Vite and set up a React project in no time.

What do I need to know? To follow along, you will need to have npm installed. It would be good if you were already familiar with npm and command-line programs, but it's not a requirement!

How to run Vite

The official way to run Vite is using the npm create command. Open your terminal of choice, copy, then run the following command:

Vite makes life easy by prompting you with questions.

Then, Vite will want to know if you’re using React or another library (remember, Vite is not limited to React.)

Here, I called my project vite-app and chose react:

True to its name, Vite will quickly generate all the scaffolding for your project and some handy scripts to enable HMR.

Once the command has finished running, cd into your folder and run the following commands: 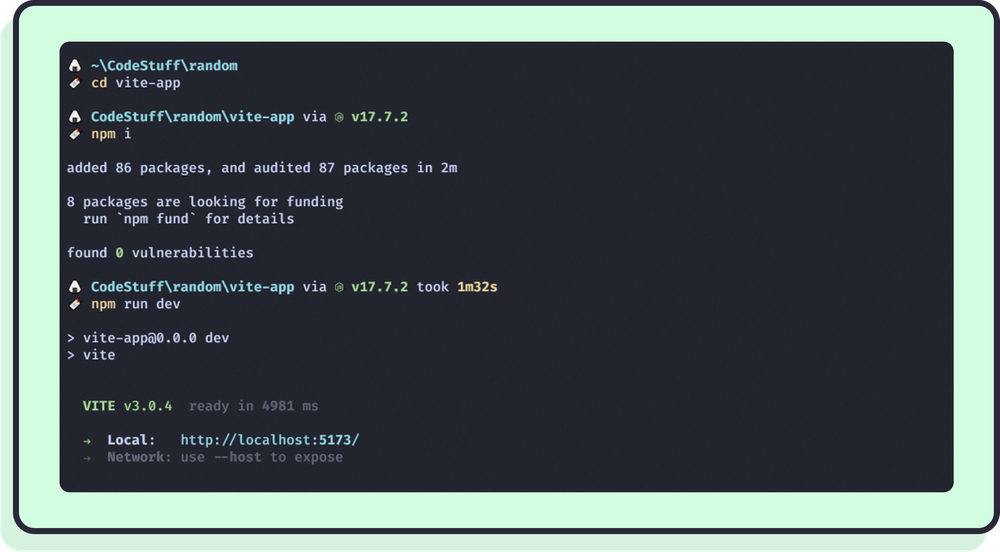 Since both npm create and npm install depend on your internet connection, they may take a minute or two to run.

Once everything is set up, look how quickly Vite served the app - just 5 seconds! That’s the magic of Vite.

Next, open localhost:5173 in your browser. You will see Vite's default template: 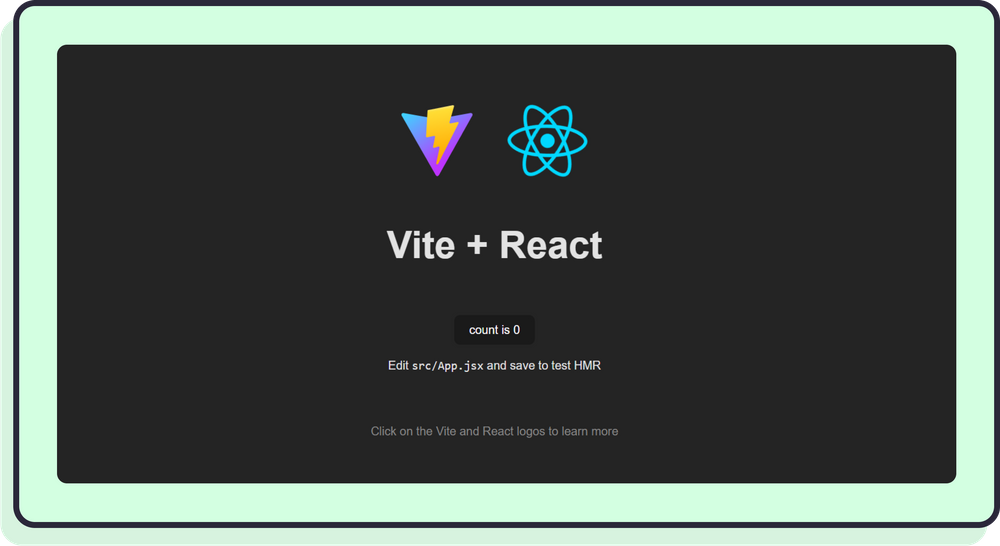 Of course you want to make some updates. Why not take advantage of HMR in the process?

In the past, whenever you would make a change to your code - no matter how small - you would need to rebuild the entire app and refresh the page.

Rebuilding the entire app for one small change is slow.

Refreshing the browser isn't so bad, but you lose all the values in your variables (otherwise known as state) every time you do that.

Sometimes this is desirable, but it would be better if only the presentation parts changed when it comes to tweaking or iterating on your app (especially the style).

HMR intelligently rebuilds and reloads only the parts of your app that actually changed. It’s fast, and you keep your application state if you want.

HMR saves time you would otherwise spend waiting around or inputting data to recreate your application state. More than that, it reduces friction, allowing you to stay focused on your task and be more productive.

If you opened your windows side by side, you should observe the following:

In my case, I increment the counter to 12 before removing the logos.

Usually, the page would reload, and the counter would be reduced to its default value of 0. HMR worked its magic behind the scenes to only change the part of the page that actually changed in the code.

Deploying your app to production

Vite makes it approachable to deploy your React website to Vercel, GitHub pages, or Netlify.

So approachable, I am encouraging you to follow along as we deploy the generated application to Netlify. When you make changes, updating the live website will be much easier then.

What do I need to know? To follow along, you will need: A GitHub account, Git installed locally, and fundamental knowledge of Git.

Nowadays, a practice called continuous deployment is common and encouraged.

That might sound a bit mind-bending so I encourage you to try it for yourself. It’ll be much easier to understand when you see it all in action.

First up, create a GitHub repository and note the URL.

Next, run the following commands (making sure to replace with your repository URL!):

Great! You’ve made a GitHub repository and uploaded the code Vite generated there.

Next, we’ll let Netlify know about the GitHub repository.

If you haven’t already, this is a good time to make a free Netlify account.

You will see the following page:

GitHub will ask if you want to give Netlify permissions to see your repositories and download them. You can go ahead!

Once Netlify has permission to interact with your GitHub account, it will load and list all your repositories. Pick the repository you just created. As you may recall, mine is called vite-app: 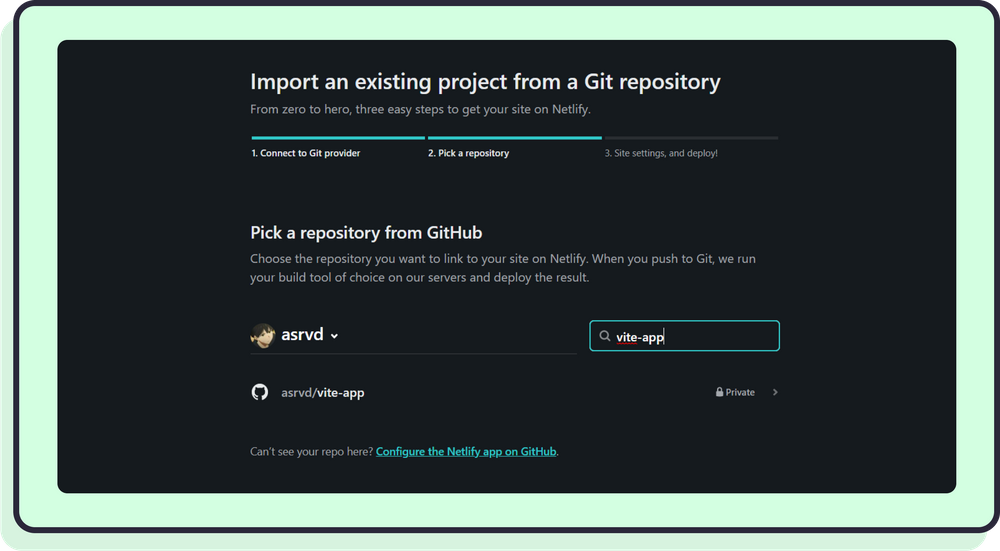 Once you select your repository, you’ll be prompted to set some settings. Vite knows what Netlify wants to see and make your life easy by adhering tot he defaults. That means you don’t have to change anything here. Just hit Deploy site: 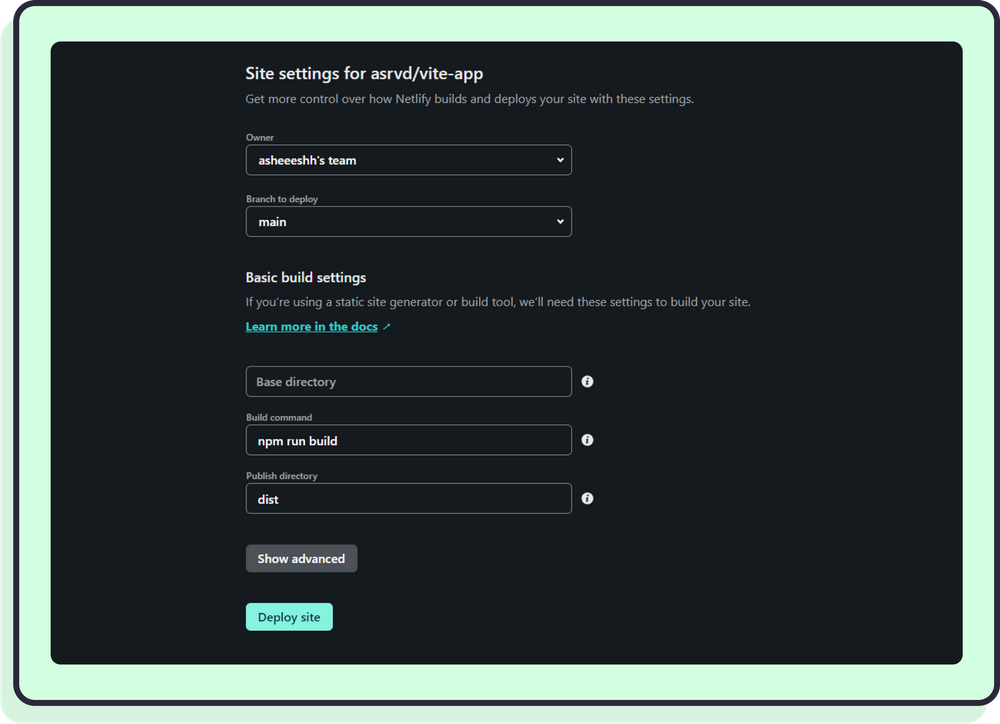 Once deployed, you should see this page and the link to your website: 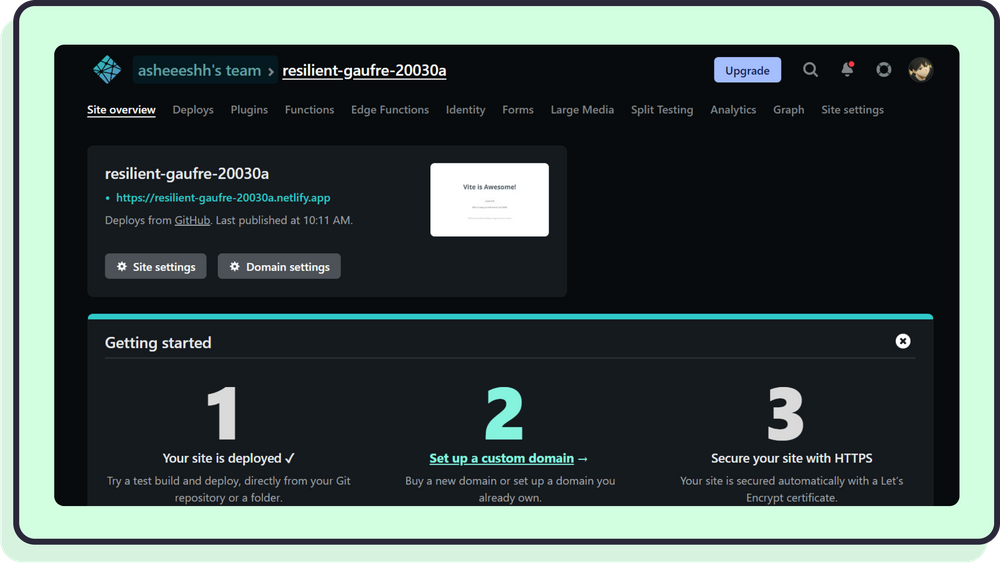 In our case, the link is resilient-gaufre-20030a.netlify.app:

When you next have some free time, poke around the Site Settings.

Here, you can change everything related to your site and even assign a custom domain name! 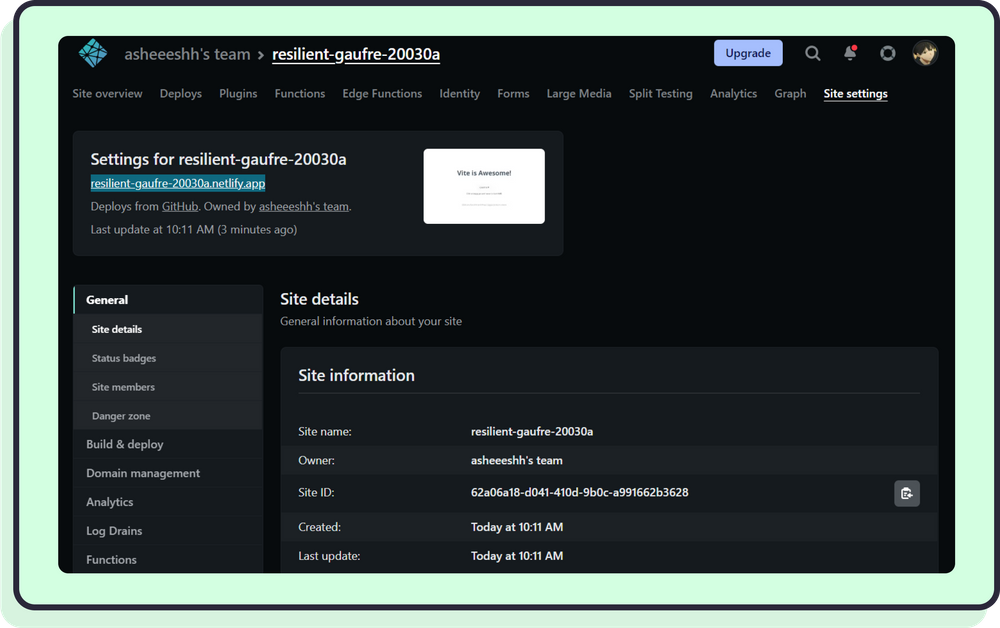 As you make changes to your code and push them to GitHub, Netlify should detect this and update the live site!

For more in-depth tutorials on deploying a Vite app to other hosting providers, you can visit Vite’s deploying a site section in its docs.

Vite is built on the shoulders of giants - namely, Rollup and EsBuild:

Understanding how Vite works under the hood at the high level lends way to some advanced features you can take advantage of.

Vite can be extended using plugins based on Rollup's well-designed plugin interface with a few extra Vite-specific options.

This means that Vite users can rely on the mature ecosystem of Rollup plugins, while extending the dev server and SSR functionality as needed.

In short, plugins let you do more with your site app by providing integrations with other tools and adding additional features on top of Vite to make development easier.

Vite has a very in-depth guide about plugins in its docs. You can read it to get started with plugins.

Env Variables are the variables set outside the code itself but are very important for the code to run and can't be leaked along with your code base.

They can be a token from an API you are using, Auth token, Database passwords, or anything that you wouldn’t want anyone else looking at your code to discover. To set env variables, you create a .env file in the root of your application and then add your variables in the format TOKEN=secret_token, In most JavaScript applications you can access your env variables in code using the process.env object.

Now, to use these tokens in your code:

There are some more concepts that you may need to know if you need more functionalities in your project like backend integration and server-side rendering but they are out of scope for this article.

According to npm, Vite is downloaded 1.4 million times a week, and that number is only going up! Perhaps now you’ve read this post, you can understand why!

In this post, we explored the fundamentals of Vite and how it compares to Create React App.

You got to experience first-hand how, when you start your project with Vite, it becomes somewhat straightforward to enable other productivity-boosting features like HMR, or even deploy your website to Netlify, for example.

Vite is easy because it hides a lot of the nitty-gritty details behind commands. Simultaneously, it’s still possible to drop down a level and take advantage of tried-and-true Rollup plugins. Looking back, it’s clear the Vite team observed developers in action to design and build a tool suitable for newer React developers and experts alike.

Did you find this article valuable?

Support ashish by becoming a sponsor. Any amount is appreciated!